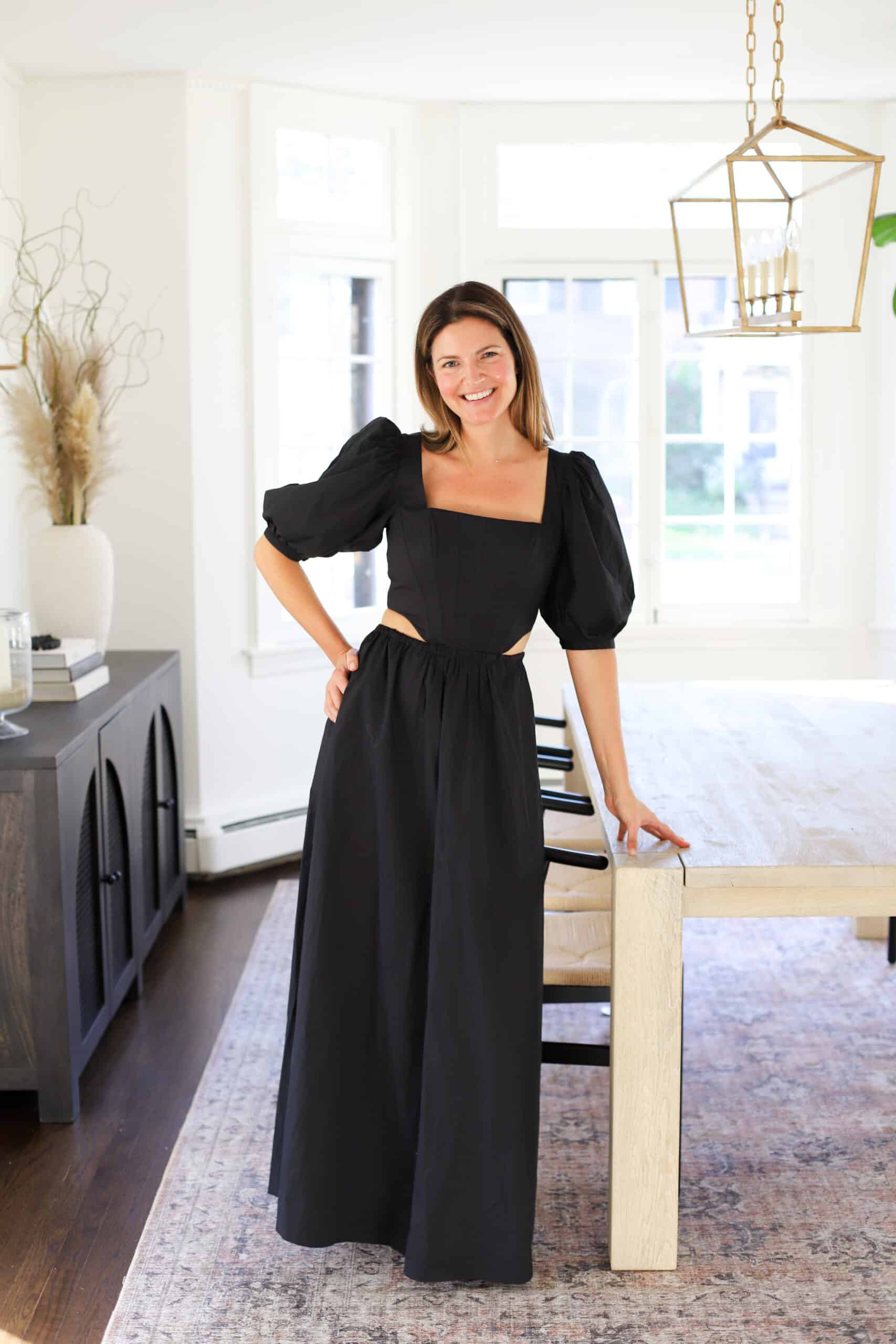 Get on the list and let’s become friends. Join our community of like minded women, and get all my latest recipes, finds and personal stories. I’m so happy you’re here. 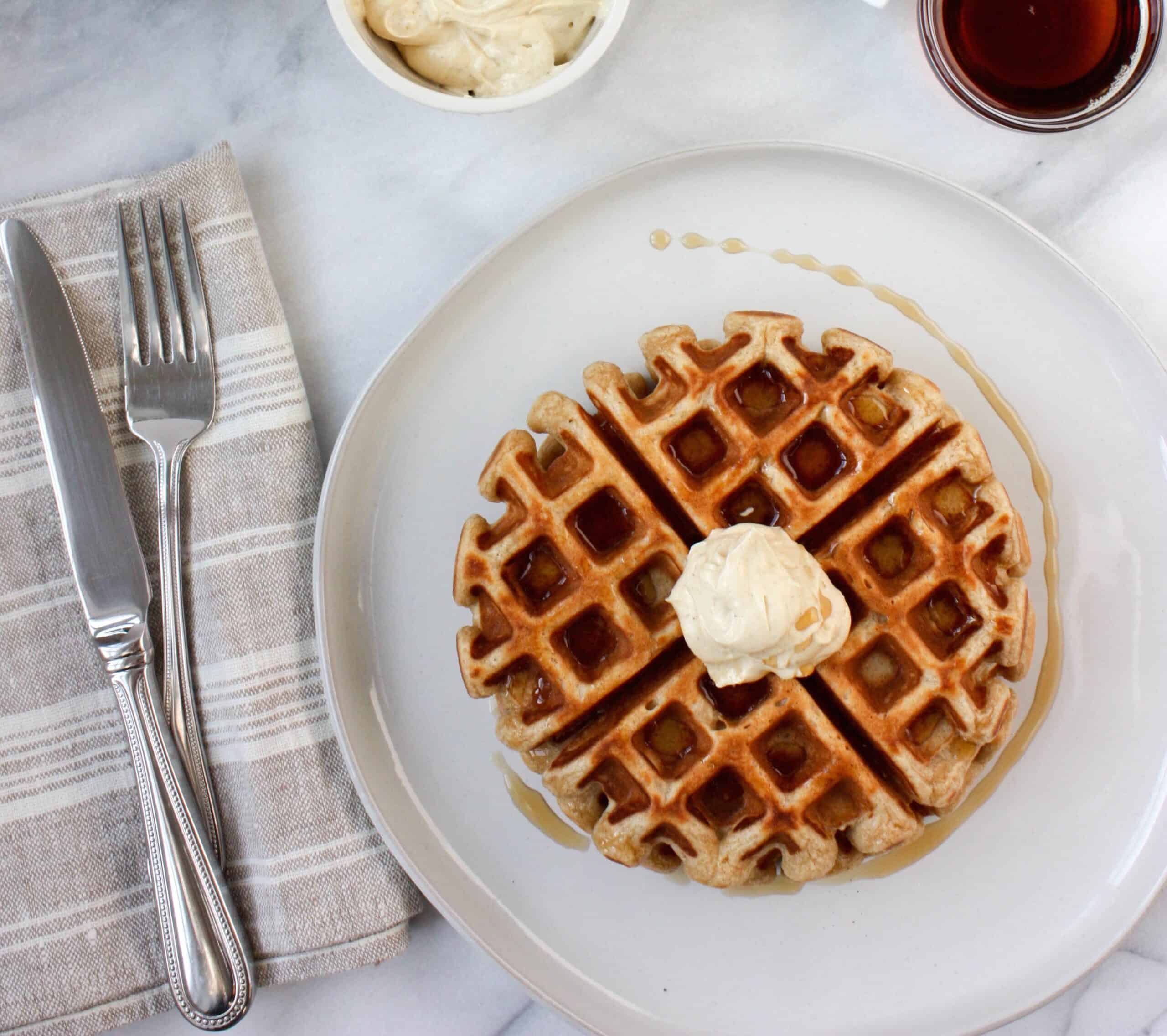 So breakfast is kind of a big deal in our house.  If you’ve been following along with us here, you’ve probably seen me share our favorite buttermilk pancake recipe once or twice (or a thousand times).  They’re pretty darn delicious.  What started out as JonPaul making pancakes on Saturday mornings when the babies were first little, has turned into a weekend tradition that is hardly ever broken.  Pancakes are our thing.

The kids got me a waffle iron for Christmas.  I jokingly said that I wanted one to JP in passing one day, and sure enough, that’s what I unwrapped Christmas morning.  I had never been much of a waffle girl.  I don’t even really remember my parents making us waffles when we were little.  So I didn’t have any recipes in my back pocket for this new device that the kids were eagerly expecting me to use (every weekend).  The pressure was on.

I played around with a recipe I found on Pinterest.  Then I tried the recipe that was included with the manual for the waffle iron (why are they never good?).

And then finally, by accident, JonPaul and I came up with a brown butter waffle recipe together that we are crazy about.

It uses butter that has been lightly browned to a nutty taste, a little cinnamon and yeast, and of course is topped off with a ridiculously delicious whipped maple butter (that, oh yeah, uses brown butter too). 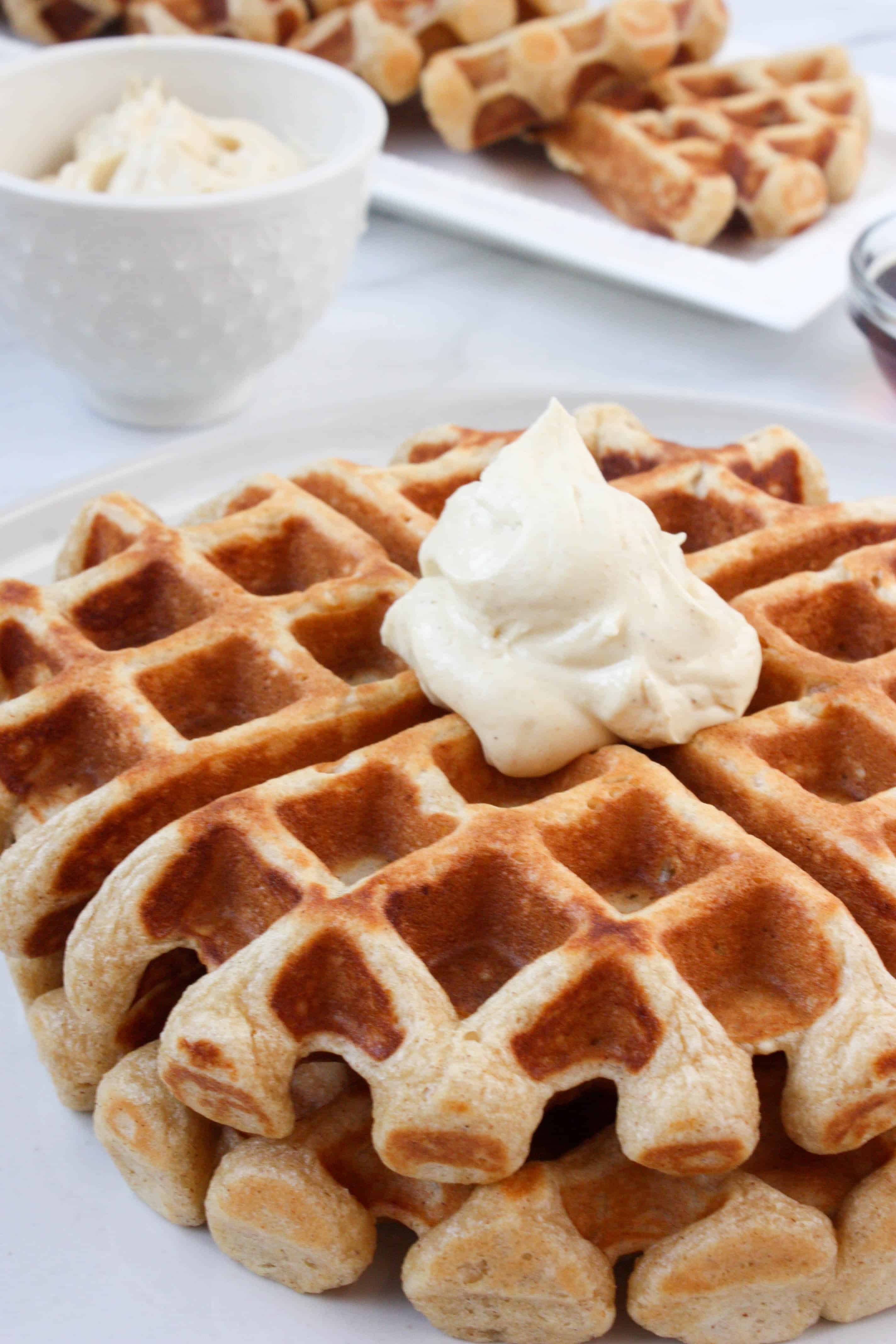 This recipe reminds me a lot of our favorite pancake recipe with the addition of the buttermilk.  But there’s something a little extra that makes these so special, and for me that’s the yeast.  While most recipes use baking soda/powder to leaven the batter, here we’re using yeast.  Which is something very different.  The yeast provides a beautiful chewy texture and a rich deep flavor that pairs so well with buttermilk.  The almost tangy sour notes are balanced perfectly with the whipped maple butter.  It’s a match made in heaven. 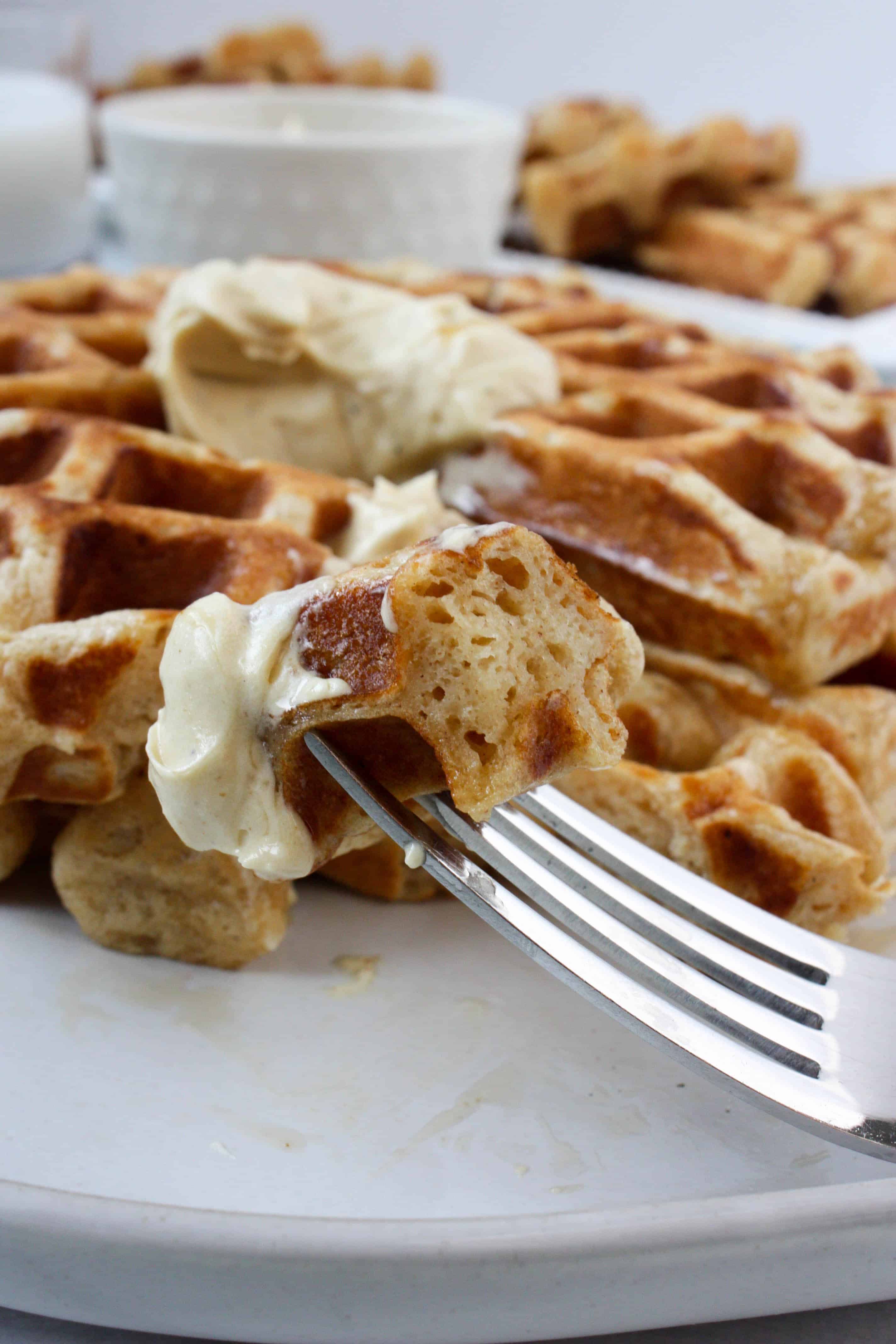 Working with the yeast is really easy too.  I just let the batter sit out at room temperature for an hour and waited for it to rise.  You could honestly smell it from across the kitchen (although maybe that was the cinnamon and brown butter ;).  But you could always make the batter the night before and place it in the fridge.  Just be sure to give it time to come to room temperature and rise the next morning.  Trust me, it’s worth the wait. 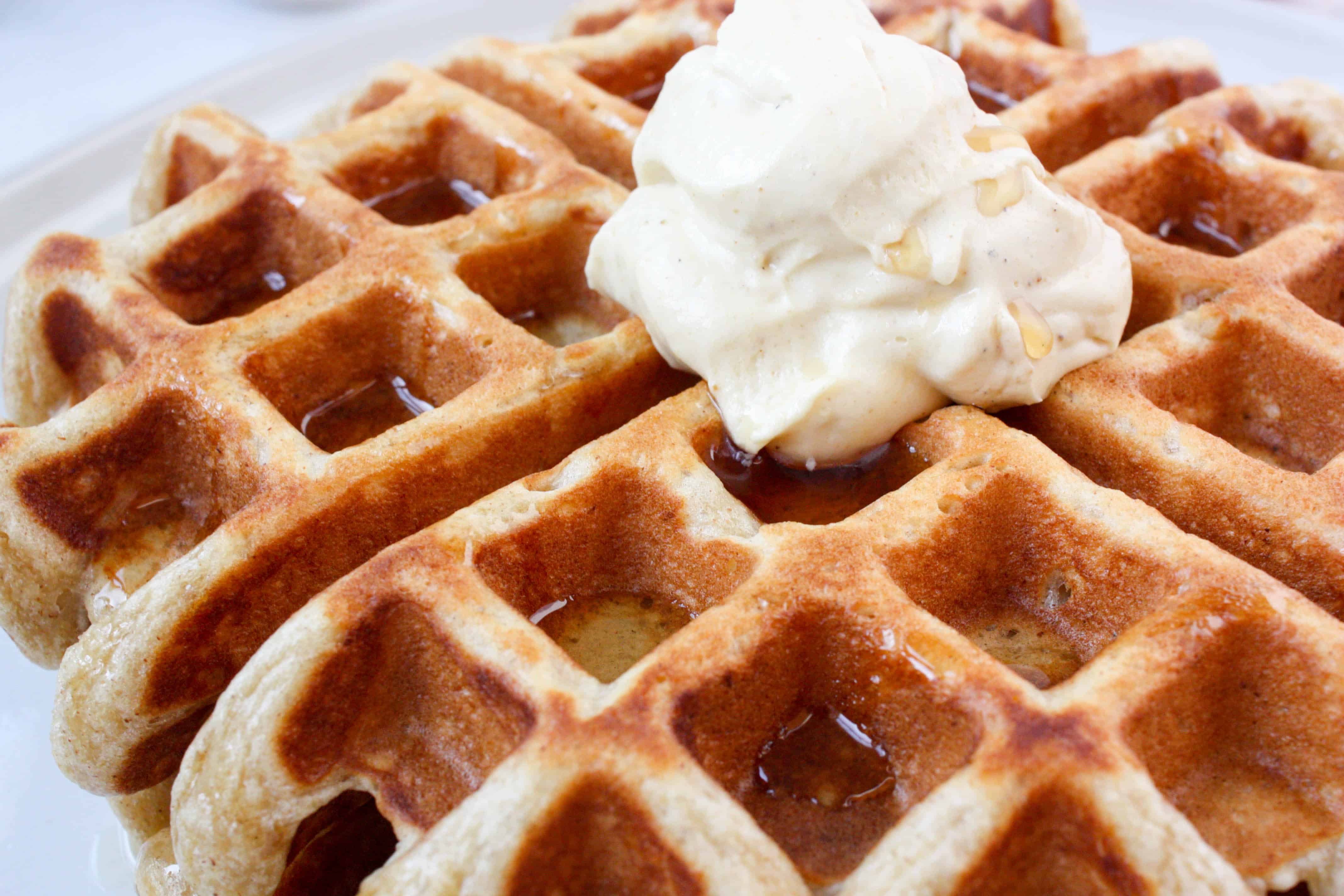 These waffles are what weekends are made for.  Putting on a large put of coffee, while the yeast works it’s magic and the smell of nutty brown butter warms up the kitchen.  It’s how every day should start off. 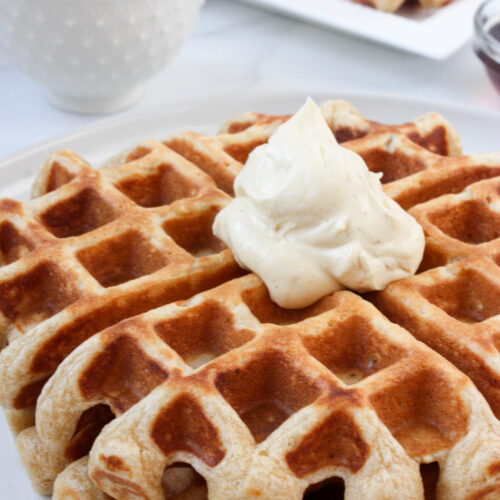 DID YOU MAKE THIS RECIPE?

Hope your weekend mornings are starting off as sweet as ours! 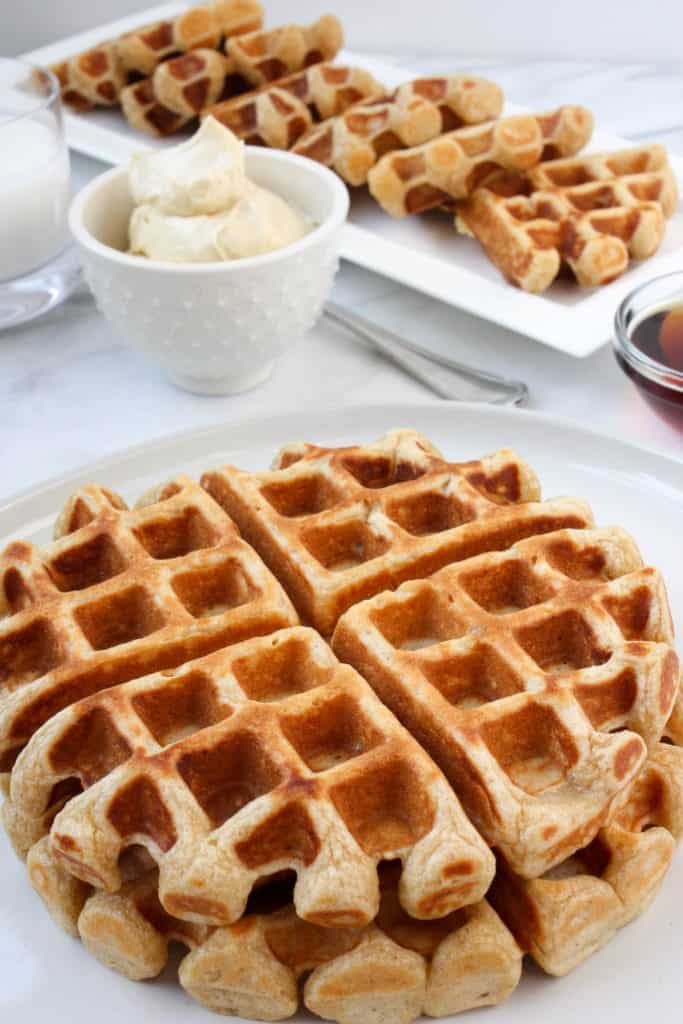 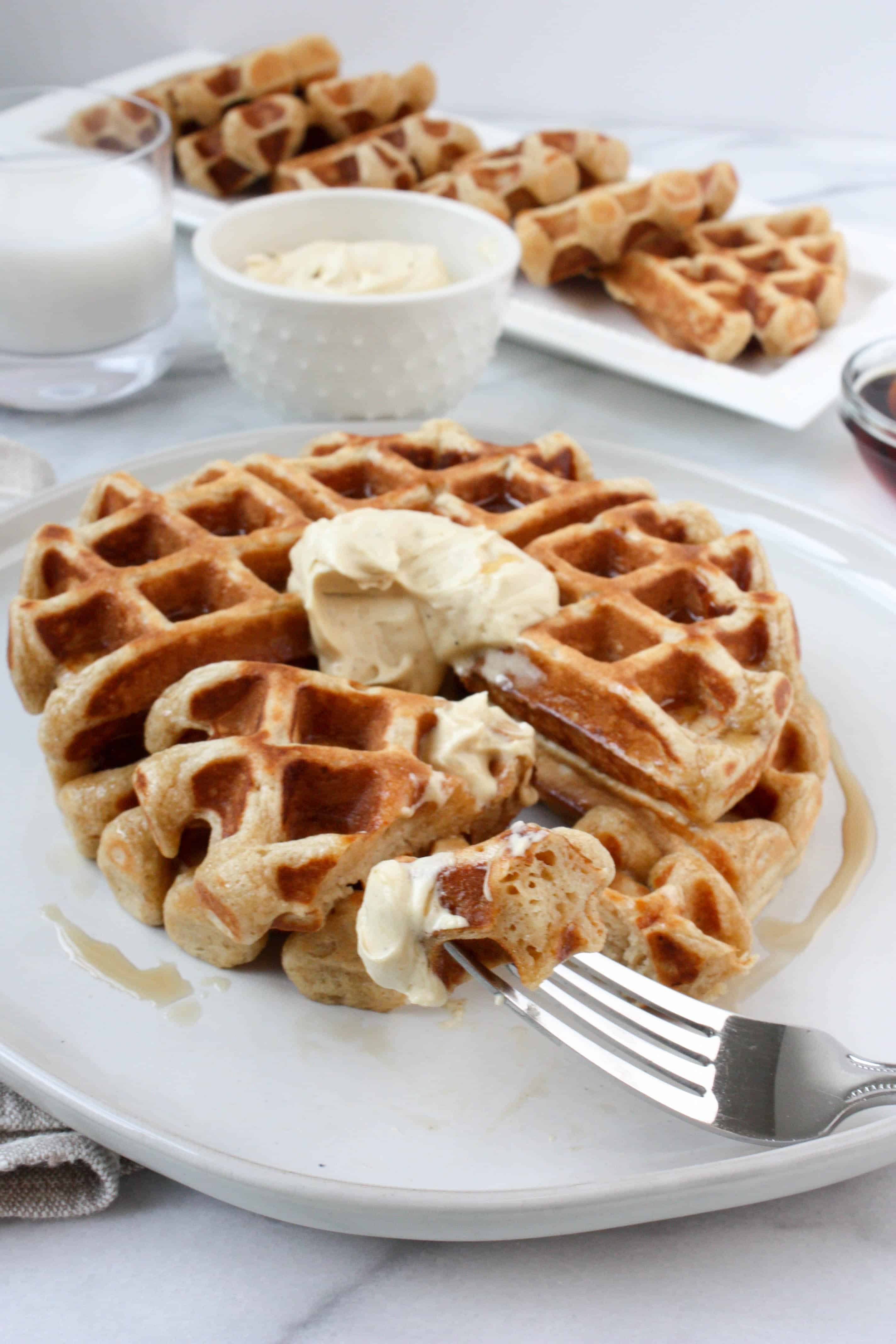 DID YOU MAKE THIS RECIPE?

Getting started on your own meditation practice can often feel intimidating.  This is a great place to start.  In this short video, we walk you through setting up your physical body and breath and finish with a short meditation together.  A great way to get you set up for your own home practice.

A 13 minute video meditation setting our own intentions, using the phrase “may I feel….”.  These simple, yet powerful, words of affirmation can be used interchangeably for whatever it is that you are needing on any given day, time or moment.  “May I feel…”.

A 12-minute video mediation letting go of tension from the day and preparing our minds and bodies for a peaceful restorative night’s sleep.

A 13-minute video meditation turnining inward to become our own healer and teacher.  Connecting to our own inner knowing and guide within each of us.

A 12-minute video meditation incorporating a unique Kundalini arm variation, opening up our hearts.  We will practice the arm variation together for a few minutes and then sit together in meditation.  This is a wonderful variation to add to your meditation practice when you need to open up your heart center.

A ten-minute video meditation letting go of stress and axiety.

A 14-minute video meditation helping you step into your own power and worth.  We so often unknowingly give our power away to others, this meditation helps us reclaim our worth, our voice and our power.

A 10-minute video meditation letting go of anxiety and overwhelm, and move into our day with lightness and ease.

A 7-minute video meditation incorporating a style of breathwork known as “box breathing”.   You will be introduced to the breathwork, we breathe together, and then sit for a few minutes of meditation using our normal breath pattern.

A nine minute audio meditation focusing on setting your own intentions.

A short five-minute audio edition setting an intention for your day.  A wonderful way to start your day, or reset at any point you need it.

I short audio meditation focusing on growing our own inner self-love and self-worth.

A short audio meditation to be used at any point of the day, but especially wonderful as you are just waking.  Staring your day with intention and mindfulness.

A ten-minute audio meditation to let go of the day and help our mind and body prepare for a restful restorative night’s sleep.

A ten-minute audio meditation on learning to surrender to what is.  A practice of acceptance and surrendering.

A short five-minute audio meditation to be used at any point of the day that you need to reset your thoughts and energy.

By placing our own hands-on different places of our body, we can revive our own love and warmth.  In this short practice we move through the different points of our body we may be holding onto tension and pain and offer ourselves a light healing touch.  A wonderful practice for anyone feeling pain or discomfort in their physical body.

My daily movement before I sit and meditate or move into my day.  Moving your body, even just for 10-15 minutes in the morning can do amazing things to get your energy and blood moving.  This practice is for ALL levels and will help you welcome the day with ease and even a little JOY.

A restorative yin practice for the days you need a little more TLC.  We hold the postures longer to get deeper into our connective tissues and joints.  A nourishing practice for our body that restores health and vitality.  Great for ALL levels.

A well rounded 30-minute flow great for starting the day and opening up your whole body.  Wonderful for ALL levels. This is what I do on my own mat almost daily.

A full body flow for all levels.  Using the strength of your own body to open and stretch all areas of the body to get your energy and blood flowing.  A well-rounded practice that will leave you feeling energized and strong.